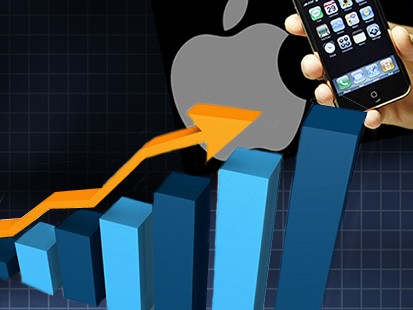 It appears money does grow on trees, but only a particular brand of Apple tree. Apple Inc released their Q1 2012 results during the week and they have exceeded all expectations. The results are ahead of revenue predictions from independent analysts by over 7% and a staggering 18% ahead of institutional investors. So just how big is the number –  $46.33bn for the quarter.

Since the meltdown of the Irish banking system we have become a little too accustomed to letting billions role off our tongue and the eye watering enormity of the results might benefit from some context setting. On an annualised basis (and converted at about $1.30 = €1.00) that turnover is €143bn per annum. That is

In reaching that figure Apple sold more iPhones every day that there are babies born in the world with a total annualised figure now in excess of 1/2 billion iOS devices sold per year.

It wasn’t a case of turnover for vanity either, there was plenty of profit for sanity to go with it. At $13bn net income for the quarter Apples profit is larger than Googles turnover which is running at around $10bn per quarter.

All this success does bring a few headaches though, notably what to do with the almost $100bn in cash and equities (loosely called cash on hand –  in other words cash not doing anything productive in Apple). Apple hasn’t paid out a dividend since 1995, which is, in some part, due to the conservative nature of the late Steve Jobs. Tim Cook the new CEO has however said that he is “not religious” about holding on to the cash.

At about 46% Return on Equity the shareholders would probably prefer that Apple found things to do with the cash. Certainly Apple will need cash to invest in new product capability, but that will only put a small dent in the pile if they keep generating stellar profits. Acquisitions are the other productive use, but Apple’s acquisitions have traditionally been small. These small acquisitions are relatively low risk (even if high impact as in the case of Siri) and so relatively easy to manage and embed in the Apple culture. Apple could and should be looking at mobile and related technologies, but any large acquisition (and with a $100bn on hand large is really large) will be difficult to merge and could risk diverting valuable attention from the current business model which it has to be said is working quite well. My view is that we will see Apple break its decade long tight fisted grip on cash and will discuss modest dividends in Q3.

In Market Capitalization Apple is now head to head with Exxon for the title of the worlds most valuable company, both are running at around $420bn. However, that is where the similarities end. Apple’s balance sheet shows about $140bn in assets, only a fraction of Exxon’s $320bn. Put crudely, if Apple buys an office desk for $200 the market will pay about $600 for it in shares. In Exxon’s case the same desk is only ‘worth’ about $260 to investors. This 30% premium on Exxon’s tangible assets is a reflection of the investors belief in the value of its intangible assets and the future profit growth potential of the business. In Apple’s case this intangible component is a staggering 200% premium. A full 2/3rd of Apples market value is in the eye of the beholder –  now that’s real love!

[This was originally posted at http://facultyblog.nuimbusiness.ie/2012/01/29/apple-exceeds-14-million-dollars-in-sales-every-minute/]

Professor of Strategic Management at the National University of Ireland Maynooth